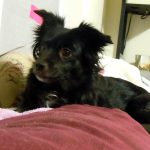 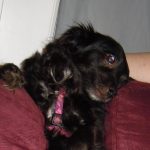 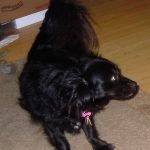 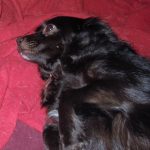 This is Momo, she is a super wonderful dog.

*** Momo is not a CDR dog but please fill out an application and it will be forwarded to her rescuer!***

History and Why Momo is Looking for a New Home

I adopted Momo in 2014 from an Alabama rescue that takes dogs out of kill shelters and ships them to new homes in the Northeast.

I wanted a Velcro dog, and I got one! Momo will follow you everywhere, snuggle at the drop of any hat, and want to sleep in bed with you at night. Unfortunately, she is also very possessive, attacking any dog she suspects of having designs on you, even large ones. Because she couldn’t stop attacking one of our larger dogs and was ending up getting badly hurt in those fights, we’re seeking a new home for both her and Flissie (also posted here) and whomever gets a new home first will go there.

Photos just don’t do Momo justice! Everyone who meets her comments on how exceptionally adorable she is. We joke that she’s an escapee from the Muppet Workshop. 😊

She’s very playful, mostly with humans, although with one of our previous dogs, she would play some Tag-and-Chase. They both thought they were being naughty when they played, so we had to carefully avoid looking at them while they played or they would stop!

Our word for dog is “woofus”, but when Momo arrived, she was clearly a different kind of animal—we joked that she was part dog, part squirrel, and part weasel. We dubbed her a “yappa” and proceeded to call her “the Yappa”. She answers to it. (And also “the Rat”.)

She figured out quickly that her humans didn’t like her barking-yapping, so she taught herself to shake her tags when she wanted us to notice her! The other dogs picked up the habit, although they used it less often.

When she first arrived, the two other dogs in our home viewed her as prey…as if she really was a squirrel…and one of them started stalking her. One snap at him, and one snap at the other dog (just in case!) and it was established that she is truly a dog and not one to be stalked.

Momo loves to dig, but not in dirt. The one time she did dig in dirt, she spent the rest of the day muttering to herself and pulling mud out of her paws. Now she digs exclusively in carpets, blankets, and cushions, but never anything covering a human. We joke that she thinks if she gets to China, they’ll make her Empress (because it’s obvious she deserves to be).

The best home for her would be one without children, even as visitors, and one in which she can have lots of one-on-one time with her favorite human(s). You will need to be thoughtful about introductions with visitors to the home—though she loves people, she’s nervous at first and needs space and time to observe them before she is comfortable meeting them. She needs to be allowed to run off to a safe distance from a visitor and be allowed to spend a little time barking at and observing them from that safe distance. She should only meet them when she is ready to do so, and when she comes over to them. Then she will be friendly and fine–this always works. Her foster home in Alabama did not allow this, and she bit a visitor on the ankle. We’ve never seen her make any aggressive gesture to a human in our home because we let her meet new folks at her pace.

Momo loves to cuddle, and she really enjoys playing a couple of games she sort of invented, that we call “Puff” and “Spider.” If you adopt her, I’ll explain Puff and Spider to you. I think she would enjoy positive reinforcement training (we’re very lousy at it!), so a home with someone interested in teaching her tricks of fun new things using this method would probably be great. She likes walks with her favorite human, but resists walking with anyone else, as she seems to get a bit nervous that she will be taken away and not returned. She does gradually adapt to other walkers when she realizes she always comes home, but she will need to get to know a new person a little bit before she will relax and just enjoy walking with them.

Momo is very healthy. The only issues being (like so many small dogs): her teeth and anxiety. The teeth are pretty easy: she likes to chew, but she generally only chews on things that are permitted. (She did chew a couple of things when she first arrived, but we haven’t had an incident since.) Hill’s Presciption Diet’s Dental Formula for large dogs does a good job, but it’s expensive. She loves all dog chewies except sweet potato.

Regarding the anxiety, her trainer has recommended that she get anxiety meds whether she stays in our home or goes to a new one. It took her two years to be willing to sleep in my sister’s presence, and my sister is very good with dogs. She is a barker, although if you stare at her in a shocked fashion, she will generally stop.

She does need a harness rather than a collar. A collar compresses her trachea and she starts coughing or wheezing, like she’s having an anxiety attack.

Momo is cute, quirky, loyal, and loving. It’s a joy to be her personal human. If you prefer a tight one-on-one bond with a special dog, this is the girl for you!

If you are interested in adopting me, please fill out an online adoption application and live close to Ithaca, Syracuse, Binghamton, Rochester, or Elmira. We do home visits on every applicant, and can’t do home visits where we don’t have local volunteers. The rescue will forward it to my current guardian, who will a) be in touch with you and b) make all decisions about my placement!