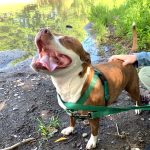 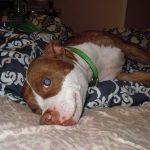 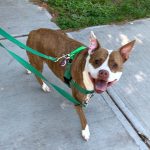 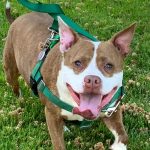 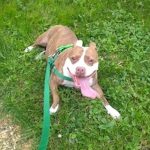 ***Flissie is not a CDR dog but please fill out an application and it will be forwarded to her rescuer!***

History, Personality, and Why I’m Looking for a New Home

Flissie (an affectionate form of Felicity) we think has quite a sad story, even though she is an exceptionally joyful girl (we and her veterinarians have inferred her past based on her condition and her behavior). She probably spent the first two years of her life in a cage, almost all the time. She also must have tried to chew her way out of it based on her having only three remaining canine teeth (we got her the dental surgery she desperately needed). When we adopted her, she had no idea about how to be a dog. She had no understanding of personal space. She wanted to be in contact with a human pretty much 24/7, she was so starved for attention. She has a most favorite human, but she’s always willing and happy if she gets to be with any humans. She is so happy and relieved when she is with a nice person. She has had not been around children since we’ve had her because one of the other dogs in our home is not good with kids.

She must have somehow escaped from her terrible situation and she literally followed my sister and her dog home from a walk one day. When my sister let her in the house, she immediately found me asleep in bed, leaped up, and proceeded to lick my face vigorously. That’s the kind of thing you can expect of Flissie.

Flissie loves to cuddle (especially butt scritches and tummy rubs!), and she is also very playful. We’ve tried a flirt pole with her, but she doesn’t seem to understand how to play with that. She does love Tug and is a fairly powerful tugger with her back teeth. She should be trainable with someone who knows how to do that (we’re lousy at it!). She enjoys all chewies, but seems to prefer hard ones. She likes wearing sweaters and doggie coats; she has happily worn a sweater in August. If you have children’s clothes, she’s a size 2T. She adores walking and will gladly do so with any human. Her New Freedom no-pull harness and leash will come with her to her new home.

Of our dogs, she’s the best at coming when called, except when she’s overly excited (which is unfortunately not a rare occurrence).

Two adorable things she does…1) she sleep-wags, which maybe means she is dreaming of very happy fun things, but with her tail wagging so much, it can be dangerous if you’re in range of her whip-like tail, haha! 2) She makes such very consistent, very adorable snuffly, grunty noises that we called her “the Pig” and “Piggums”. She answers to both names!

Flissie has been with us just over three years. Unfortunately, one of our other dogs, Momo (also posted on this site, looking for a new home), is extremely possessive of me and has been attacking Flissie. Though Flissie seems like she would love to avoid conflict at all costs, she eventually has to defend herself from Momo’s attacks, and so tries to hold her down. Momo has gotten hurt twice during these fights, but both times it was more that Momo was basically impaling herself on Flissie’s remaining fang more than Flissie’s trying to bite her. Flissie tries to avoid Momo’s wrath as much as possible, but her need to be near me and Momo’s unwillingness to share me has been an impossible situation for some time. Flissie is now quite nervous around small dogs like Momo no doubt due to what has been going on between them.

Flissie does seem to get along well with larger dogs. One of her dog walkers had this to say about her:

Based on what we’ve seen while walking Flissie, she seems pretty scared of small dogs and friendly/interested in large dogs. She hasn’t ever behaved aggressively toward another dog while walking – if the other dog and its owner are interested in interacting, I’ve seen her behave quite well with them – sniffing and tail wagging appropriately. When she was at my house yesterday, Flissie was enthusiastic (tail wagging, no hackles up) and interested in my cat, who was very much not interested in her. I was impressed that Flissie didn’t pursue the cat even though the cat was incredibly dramatic in her response to seeing a dog.

Basically, I haven’t seen anything like aggression when interacting with her, though I imagine that if another dog initiated aggression, her response could be devastating – just because she’s so strong (like with Momo). With Winston [the third dog in our home], she is gentle and polite – often slowing her walking pace down to match his when he gets tired. She waits up for him. She wants to befriend every person she meets on the street and does so with good manners – she doesn’t jump on strangers when out walking.

If Flissie can find an appropriate new home, her quality of life will improve – she is energetic and needs lots of exercise to be her best self.

Her health, now that all of the broken teeth have been removed, is generally excellent, but she will put on weight if you let her. She has hurt her right hind leg twice, so she may develop arthritis there as she ages. Her vet says that she should be muzzled whenever anyone tries to trim her nails, although we have been making progress on that.

She has excellent hearing, but her sense of smell seems a bit impaired…she has trouble locating food that falls on the ground (other dogs would have no trouble locating by scent) and she tends to over-sniff other dogs (which can annoy them)…for instance, she often lifts Momo’s hindquarters completely off the floor to get a complete sniffing in. You need to give her extra time to sniff things please, dogs use their sniffers to make sense of the world around them, she just needs more sniffing time than most in order to do so.

She does have some anxiety and might benefit from some temporary anxiety meds. She is quite the barker, usually the first of our dogs to start and last to stop!

Flissie is joyful and loving and wants to love you and any humans in your vicinity. I’ve never met anyone who didn’t love her on first meeting. I will really miss her gentle nose nibbles, but know that she will have a much better quality of life in a home in which she is not harassed and attacked just for wanting to share love with her human(s).

If you are interested in adopting me, please fill out an online adoption application and live close to Ithaca, Syracuse, Binghamton, Rochester, or Elmira. We do home visits on every applicant, and can’t do home visits where we don’t have local volunteers. The rescue will forward it to my current guardian, who will a) be in touch with you and b) make all decisions about my placement!